The annual “Worst of the Year” post is back for the third year!

10. A&E had high hopes for Those Who Kill, giving it the lead in of their top drama, Bates Motel.  The series, starring Chloe Sevigny, followed a detective and forensic psychologist tracking down serial killers.  Critics were not too kind to Those Who Kill, with the consensus on Rotten Tomatoes pointing out the monotonous plots and senseless violence (so maybe it was best on CBS?).  In either case, viewers were not into the series.  The show kicked off with a meager 1.4 million viewers, holding onto only 45% of the Bates Motel audience.  By week two, only 800,000 viewers were watching, and retention fell to 37%.  A&E pulled the series after two episodes – very unusual for a scripted cable series.  Those Who Kill would later air on LMN (Lifetime Movie Network) for its final eight episodes, and then it was officially canned.

9. FX had a big hit in Archer and needed a series to air alongside it.  The network ordered Chozen, a series about a gay white rapper trying to rebuild his career after being released from prison (or is it prizon?).  Critics lashed out at the series, with Brian Lowry of Variety calling it “outlandish and stale”.  With a terrible premise, it is no surprise viewers were turned off.  The premiere attracted 940,000 viewers, holding onto about 58% of the Archer audience.  Ratings fell in each subsequent week, resulting in a quick cancellation notice from FX.

8. The only thing worse than the cookie-cutter crime procedural is a cookie-cutter medical drama.  This year, the award for worst medical drama goes to USA’s Rush. The premise focused on a doctor in LA who partied and served rich clients of the city. USA pushed the series hard, hoping to find a hit among the large losses for veterans on the network.  Unfortunately for USA, it was a mediocre 1.7 million viewer debut.  Rush would hold around that level for most of the season, but near the end of its run, it has suffered double digit loses.  USA officially canned Rush in October, opting to renew the more-original Satisfaction in its place.  Note to USA: its time for some big changes in your original drama department.

7. Lifetime tried to breakout of its funk with a new take on the post-apocalyptic craze with The Lottery.  In the series, women are no longer able to have children and must rely on a lottery to choose who gets 100 viable human embryos (created by a doctor and the government).  While the premise is a bit far-fetched (and unique), critics said the series was boring and unoriginal.  Viewers agreed.  The Lottery debuted to 1.08 million viewers in July.  When the series finale aired in September, only 425,000 viewers were left watching – a large collapse for a series that started with a tiny audience in the first place.  Lifetime officially cancelled the series one month later.

6. George Lopez was a successful comedy for six seasons on ABC.  In fact, the show drew a sizable audience in its syndication run on Nick at Nite as well.  Debmar-Mercury took note and signed George Lopez to a new series, Saint George, that would air on FX under the 10-90 model.  Under this model, if the first 10 episodes were successful, 90 more episodes would be produced (similar to Anger Management).  Critics panned the new comedy offering, with the series receiving a 0% (yes, ZERO) on Rotten Tomatoes.  My favorite review came from Scott Pierce of the Salt Lake Tribune, who simply said, “It’s incredibly bad.”  The premiere episode kicked off with a lowly 1.21 million viewers, before falling to 650,000 viewers for its final episode.  FX did not proceed with 90 more episodes (thankfully) and officially canned the show in June.

5. Lindsay Lohan has done her best to stay out of the public limelight for most of 2014.  She did, however, get her own docuseries from OWN (Oprah Winfrey Network), simply titled Lindsay.  Debuting in April, the series followed Lohan on her drug rehabilitation journey, while trying to restart her life.  Unfortunately for OWN, the attraction of Lohan for all those years was her drug problem – not drug rehab (even if we all want Lohan to get healthy again).  The debut brought in 693,000 viewers – an okay start for OWN.  When the finale aired less than two months later, ratings fell to an all time low of 406,000 viewers.

4. Similar to Saint George, Partners was part of the 10-90 programming from Debmar-Mercury and broadcast on FX.  Similar to Saint George, Partners was also extremely awful.  Led by comedy-veterans Kelsey Grammer and Martin Lawrence, Partners was about two lawyers who end up working together.  Debuting in August, Partners scored 1.1 million viewers.  By episode six, only 380,000 viewers were tuning in to the comedy dud.  Viewership rebounded slightly, but the numbers were still far too low.  Neil Genzlinger, of the New York Times, called Partners “labored and unfunny.”  A few weeks after airing its season finale, FX Networks CEO John Landgraf said the 10-90 experiment was “an experiment we won’t continue in the long run.”  Good riddance, too!

3. 2014 must have been the year of crappy comedies starring “hey look, it’s those people from the 90’s and 2000’s!”  Number three on the list is ABC Family’s Mystery Girls, a “comedy” starring Tori Spelling and Jennie Garth.  Don’t get me wrong, I think Jennie Garth is great, but Tori Spelling is one of the worst actresses on the planet.  I thought about including her docu-series on the list as well (True Tori) but left it off and went with Mystery Girls instead.  Anyway, Mystery Girls revolved around stars of a former 1990s TV series who team up again to solve real-life mysteries (how intriguing!).  Boston Globe’s Matthew Gilbert said of Mystery Girls, “This is overly lit shtick that gets rancid after five minutes.”  For its June debut, a tiny 760,000 viewers tuned in, with the number slipping to 460,000 in week two.  The viewership for Mystery Girls would fall as low as 370,000 viewers for episode eight, with a slight recovery for the finale.  It was not enough of a recovery, however, and Mystery Girls was cancelled by ABC Family.

2. CNN tried to stop its slumping ratings by offering viewers something new: documentary series.  One of their finest efforts was Chicagoland, an eight part series focusing on the mayor of Chicago, Rahm Emanuel.  The series ran into criticism when it was revealed in April that scenes were coordinated by the mayor to reflect him as the “star” and to further develop storylines.  Rick Kogan of the Chicago Tribune called Chicagoland “contrived”, and TDogMedia said the documentary was “one of the biggest bombs in the history of television.”  Episode one of the doc nabbed 629,000 viewers, good enough to finish behind Fox News and MSNBC in the hour.  Eight weeks later, viewers were done with the mayor’s infomercial, a series-low 325,000 tuned in – despite an appearance from First Lady Michelle Obama.  Overall, Chicagoland finished the season down 29% in total viewers from the year ago eight week average, which featured repeats of AC360.  Suffice to say, Chicagoland won’t be returning for a second season anytime soon.

1. In a year with a heavily scripted list, the number one spot does not go to a scripted series, but a reality series.  And no one deserves the number one spot on the list more than a product of E! – and no, its not the new Kardashian series.  Receiving the honor of the worst new cable series of 2014 is Rich Kids of Beverly Hills.  The reality series focuses on a bunch of spoiled brats who live off their parents money.  Yes, this is an actual show on television.  As you may have guessed, reviews were not good.  My favorite review came from Jon Caramanica, of The New York Times, “The show is inspired by Rich Kids of Instagram, a Tumblr devoted to gently needling, and maybe gently envying, young people who gleefully show of their wealth on that photo – and video-sharing service.  The result is a document of young narcissists relentlessly documenting themselves.”  A meager 1.1 million viewers watched the premiere episode, retaining only 43 percent of audience from Keeping up with the Kardashians.  Ratings were low all season, and yet, for some reason, E! renewed the reality show for a second season.  Ratings were on the rise, hitting a high of 1.2 million viewers in August.  Once it lost its Kardashian lead in, however, only 611,000 viewers were left.  E! announced a spinoff, Rich Kids of New York, in March 2014, but no recent announcements have been made in regards to the series.  Let’s hope the declining ratings for the original series, and lack of word on the spinoff, is enough to send Rich Kids to the television grave. 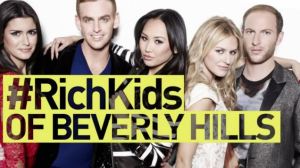